Its purpose is: 1, to promote the EU countries and the European Free Trade Institute issued by the mutual recognition process of non-destructive testing certificates, 2, to promote non-destructive testing equipment and personnel qualification certificatein in Europe and even international mutual recognition, so that non-destructive testing equipment, equipment, talent free movement, to avoid repeated testing caused by economic waste. The organization's Accreditation Executive Professional Assembly (CEC) consists of six member States: with the exception of three executive members (UK, Germany and France), the board of directors of the European Federation of Non-destructive Testing appoints three representatives from the other member states of the system. The rotating presidency is also in the three countries for a two-year term. At present, the member states of the organization are full members and joint members. The former refers to European countries, while the latter is representatives of countries other than Europe. EFNDT has developed (or is in the process of developing) a number of unified NDT standards that are advanced. Especially in ndT personnel qualification, he has a mature mutual recognition process.

The 12th European Conference on Non-destructive Testing was held in Gothenburg, Sweden, from 10 to 15 June 2018, and was accompanied by an exhibition of non-destructive testing instruments and equipment.

More than 1,780 delegates attended the meeting. Of the approximately 700 papers received, more than 488 were oral exchanges, 70 were for posting papers, divided into nine sub-sessions, and Nobel Laureate Mr. Jochim Frank was invited to give a presentation to the Conference. The delegates to the meeting came from about 47 different countries and regions, including more than 40 representatives from China, and the representatives of the China Non-destructive Testing Society were: Shen Gongtian, Chairman of the Committee, Zhou Zhenggan, Vice Chairman, Ji Jingyuan, Deputy Director-General, etc.

During this European Conference on Non-destructive Testing, I represented Chairman Shen Gongtian at the APFNDT Meeting of the Asia-Pacific Alliance and the International Conference of Non-Destructive Testing (ICNDT) on behalf of the China Society of Non-destructive Testing. Oral exchange report on the ultrasonic detection technology of ring array and its application in the detection of titanium alloy additive components, Deputy Director-General Ji Jingyuan participated in the meeting of Working Group I of WG1 of the International Conference on Non-destructive Testing, during which representatives of national societies and regional societies discussed and voted on the future direction of the development of the non-destructive testing industry. The revision of relevant standards and the qualification of personnel and other key work. The conference concluded on 15 June 2018 and the 13th European Conference will be held in Lisbon, Portugal, from 06 to 10 June 2022. 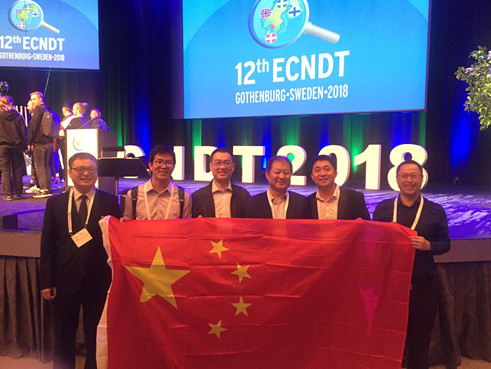 Photo of some Chinese delegates